As we come in to land a single gravel airstrip stretching from the waters edge to a clearing in the rainforest comes into view. From the sky there appears to be no roads in or out, no tour busses, no real streets, not even a shop to be seen. All looks quiet along the fiord, an occasional canoe paddles between shorelines and winding paths snake through the dense bush hosting a handful of locals walking between villages. The water glows a rich turquoise as the sun bounces off the reef below creating vivid opal-like outlines around the coast. Nearly forty years ago my parents experienced this same descent down to Tufi in a little 6 seater plane piloted by my uncle and still today their description matches my view exactly; an unspoiled paradise.

In my hand are a set of photos that had passed on to me about a month before our trip. Among them are pictures of locals performing a Sing Sing in elaborate feathered head-dress and locals with beaming smiles standing alongside a 1970’s version of my parents. To be honest I’m expecting the photos to be a relic of times past, after all it’s been a long while since they were here and the world has changed. We wander through the resort to our room and it is truly quite. The sounds of exotic birds in the distance mix in harmony with the ocean, like a meditation soundtrack. The rooms are beautifully simple with all of the comforts one would need without disconnecting you from the natural surroundings. It’s perfect. 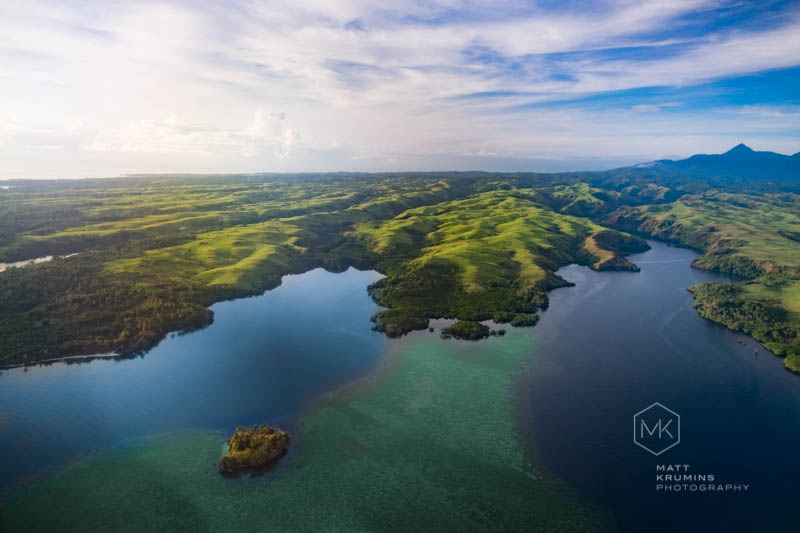 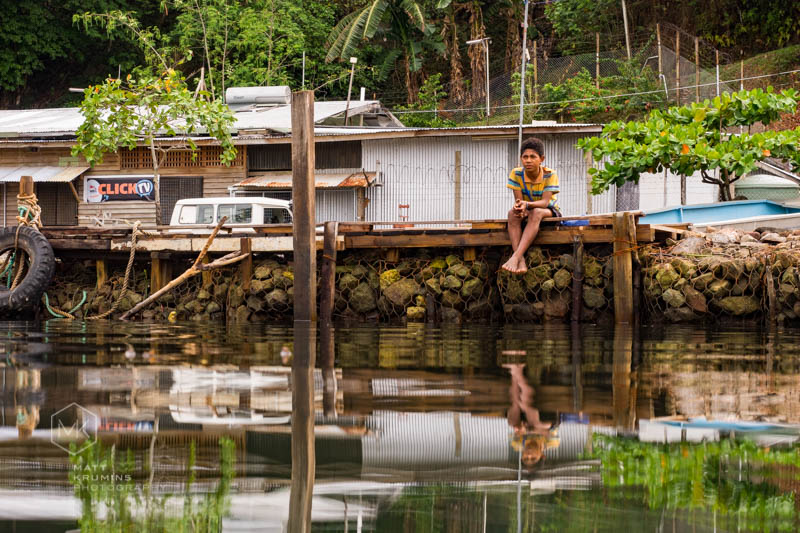 It’s our first morning and from a hammock on the balcony of our room I watch the sun rise over the ocean, coffee in hand eagerly anticipating our first dives. At the boat shed below the resort our gear is being set up and loaded on to the boat and it’s approaching time for our dive guide to brief us. With a deadpan face he apologises for the current visibility before bursting at the seams with excitement and an ear-to-ear smile that can only come from a PNG local, “the viability is currently only 40m”. Most dive sites are within 20-30 minutes of the resort and just the journey out through the fiords is a must-see experience. The mountains separating the fiords shoot up almost vertically out of the water and are cloaked in vines tangling the trees together in a blanket of green. The reef skates just metres below the boat as turtles float on past catching a breath of air before descending back into the sea. Looking back towards the mainland the most striking feature is the complete lack of infrastructure; there are no buildings or modern towns, just thatched villages camouflaged in the thick rainforest. 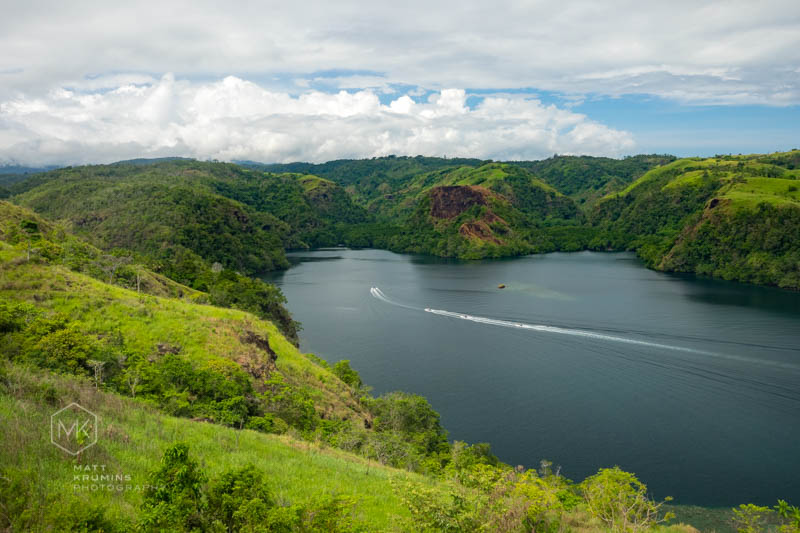 We pull up to our first site and looking into the water every detail of the reef is visible from the surface; it’s like staring through tinted blue glass at the underwater world below. As the bubbles clear from our masks we are face to face with a bustling city; millions of fish are travelling on invisible highways that criss-cross and weave through the reef. Huge schools of colour glide over the top of us as the silver shine of ten thousand fingerlings dart across the ledge into the deep. Corals of all shapes and sizes sprout from the steep rock walls silhouetted by the sun revealing a psychedelic mix of reds, greens, yellows and oranges as we approach. The reef is teaming with life and is so healthy. The dive sites in the area are made up of huge pinnacles rising from the deep, re-routing the currents around the tapered points of the reef creating the perfect environment for huge schools of fish life. 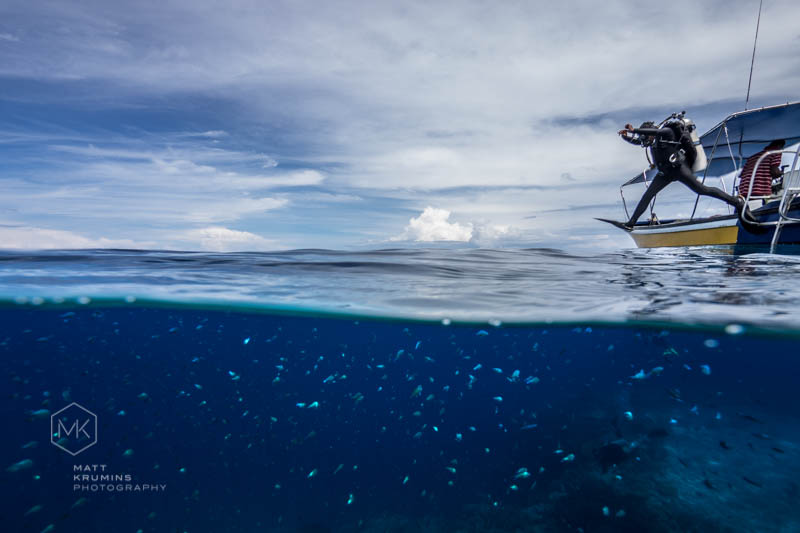 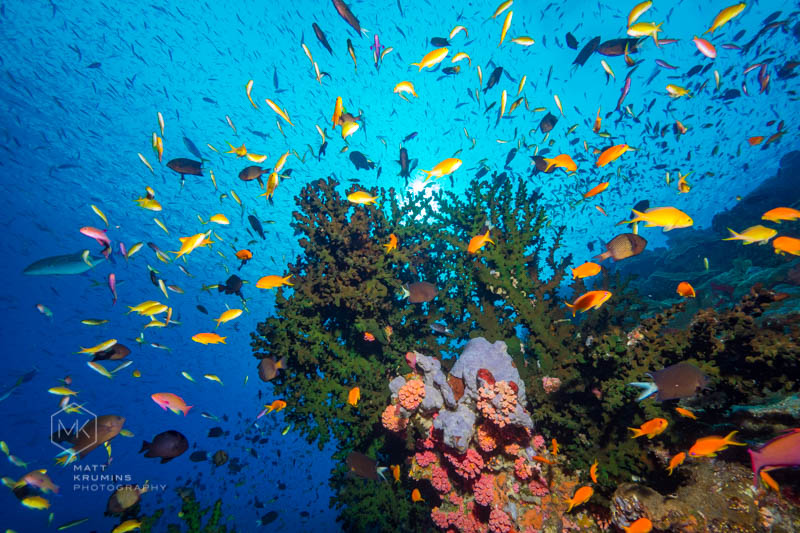 As we explore we truly are in paradise but looking across the vast spans of reef I can’t help but feel there is something different about these dives. The fish life is incredible and the coral is immaculate but there is something else, something that isn’t immediately clear. I continue to snap away, the strobes on my camera rig exposing the assortment of colours on the reef and it suddenly hits me; there is nobody here. No walls of bubbles from other dive groups, no silhouettes of students floundering around near the surface, it is just the small group of us who descended together, floating in the water column with unobstructed views. I think back to the photos back in the room and recall seeing my dad with snorkel gear on in the fiord with shell casings from the war. With so few people around I would bet there are more of these relics still lying around. 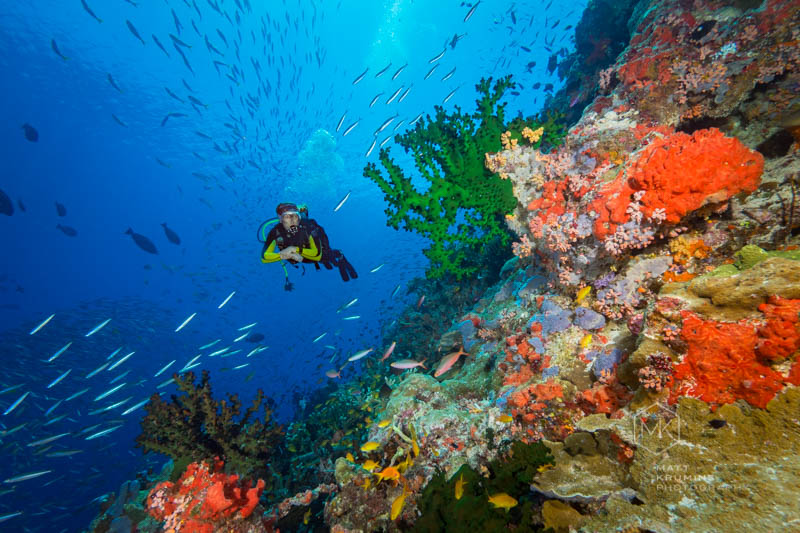 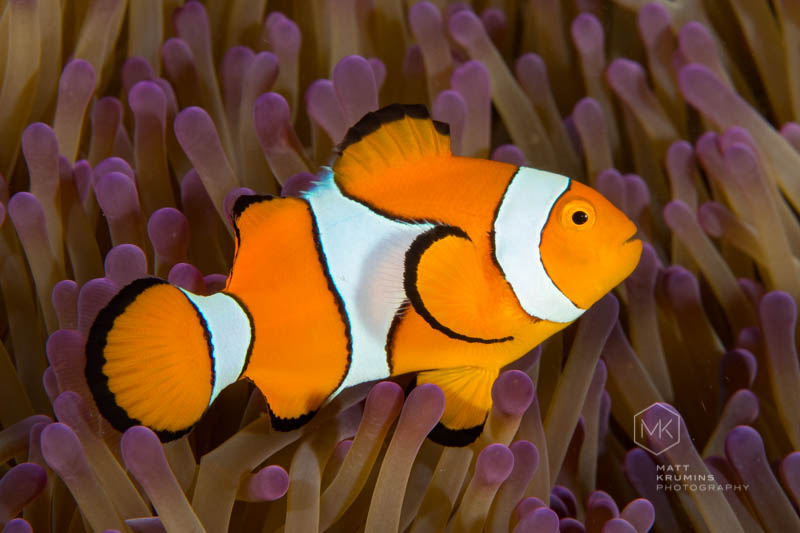 Late in the evening the sun’s glow lights the sky in purples, oranges and yellows as it sets in front of us. Conversations around communal dining table reflect on the days dives as we trade stories from the day. Kayaking, diving a hammerhead sighting and the amazement at the crystal clear water dominates the conversation. Post dinner, our three-course meal has us reclining in our seats, glass of wine in hand as our day rounds out. Tomorrow it’s off to Tufi village to meet the locals and hopefully track down the people in my parents photographs. 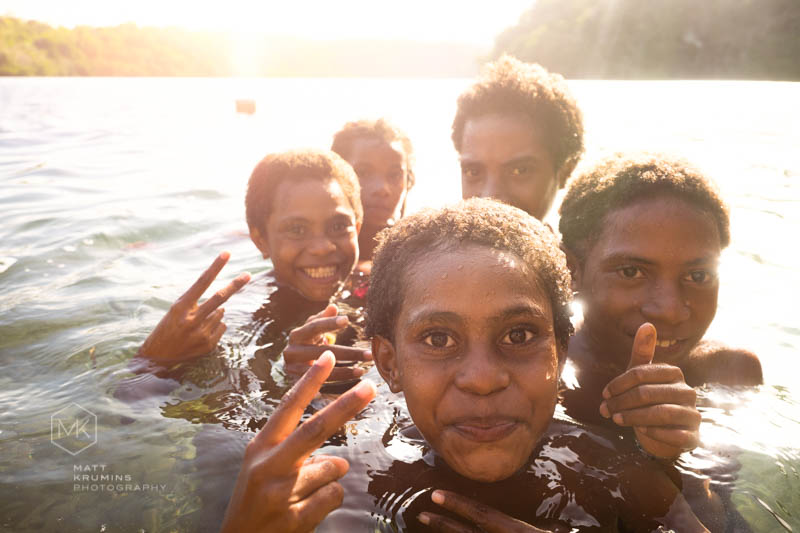 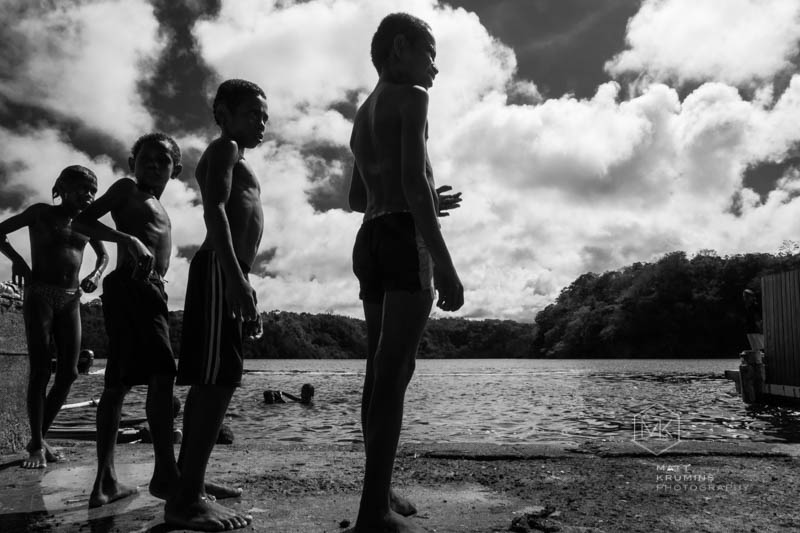 It’s still early and the light hits the steep walls of the fiord creating a magical glow across the water. Our boat is bound for the small village of McLaren Vale where the locals are preparing to share their rich history and traditions with us. At the end of the fiord a group of tiny outrigger canoes collect us from our powerboat and glide across the water into the mangrove lined canal. We meander through the rainforest and pull up to the side of the canal in a small clearing. The only sounds are those of the rainforest; insects, birds and the ripples from the water lapping against the mangroves. All of a sudden a shriek cries out and the sounds of a thousand wings in the canopy flutter to safety as two spear toting men dressed in loin cloths and rich black body-paint pounce from nowhere. It’s a shock to the system as the situation plays out finally resolving with a smile and a handshake to welcome us as friends and not foe. The reenactment is scarily realistic and quite confronting, but essential in shifting us from tourist mode to visitor mode. We are guided to the village where the chief talks us through their traditions from food preparation to fire starting and the traditional bamboo-tattooing of the womens faces. The elders describe to us how Tufi’s culture has changed and that it has been many years since these face tattoos were mandatory for females. “We have adapted because we know that the outside world does not view our tattoos the same and a person has their own choice how to treat their body” the chief explains. The young girl in the demonstration looks up at us as the paint is applied to her face to replicate the traditional patterns and it’s hard to imagine a time when this was the real deal. 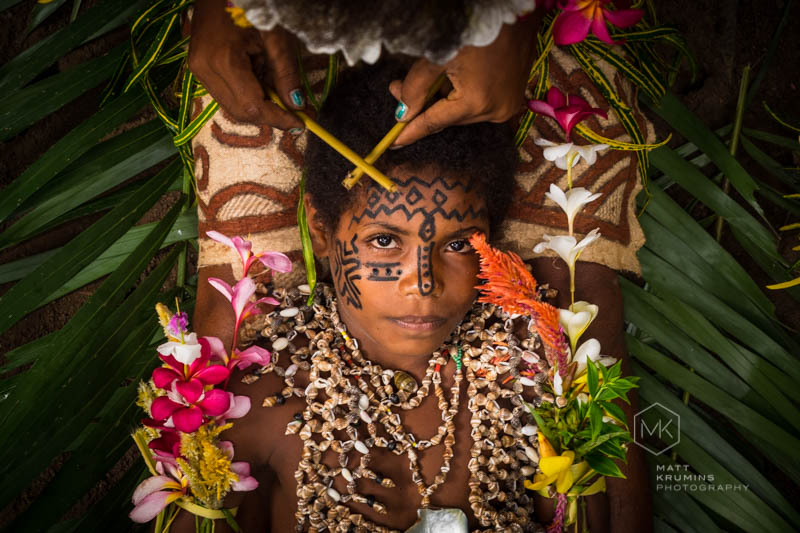 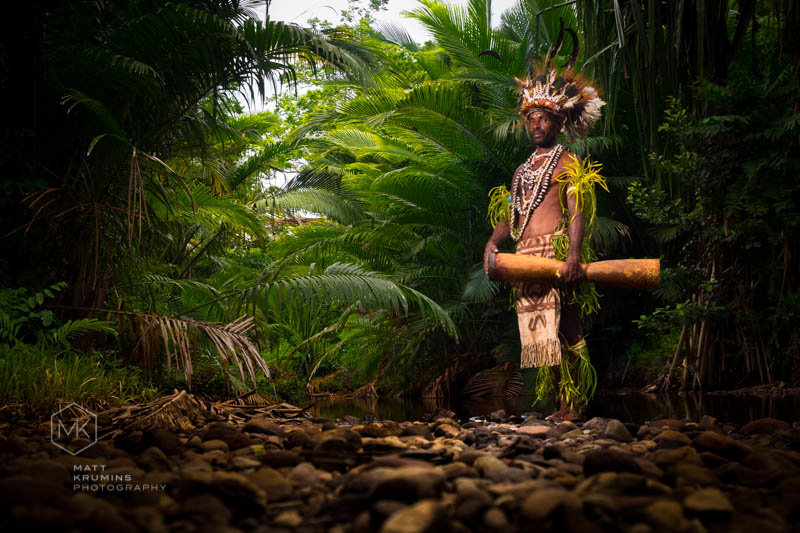 Our visit concludes with a small Sing Sing, reminiscent to the photos I still have in my pocket. We are told the feathered head-dress worn by the men are in some cases over one-hundred years old and it has me wondering if maybe they are the same ones used in the performance back in 1980. I invite the chief and elders to have their portraits taken and we move down to the river as they clutch their drums made from hollowed out logs, stretched with lizard skin and bees wax. As I photograph them there is such a deep sense of pride, it shows in their stance and in their powerful stare. I take the pictures from my pocket and ask the chief if he recognises any of the people in my parents photos. He pauses and reflects, it’s clear he is sifting through decades of memories to pinpoint this moment from nearly forty years ago. He looks up and a smile creeps across his face “Yes, yes” he declares, “this is a tribe from Randal’s Beach just a few kilometres up the coast, you see this lady?” pointing at the picture “her daughter now works at Tufi Resort”. There was real joy in the discovery as the elders huddled around our collection of photos. Mum and dad had flown here with some friends on a Cesna piloted by my uncle and had described the scenes all around us with such vivid detail it was almost surreal to be experiencing it ourselves. To be back here nearly 40 years later with so little of the village itself changing was a real testament to the authenticity of the place. 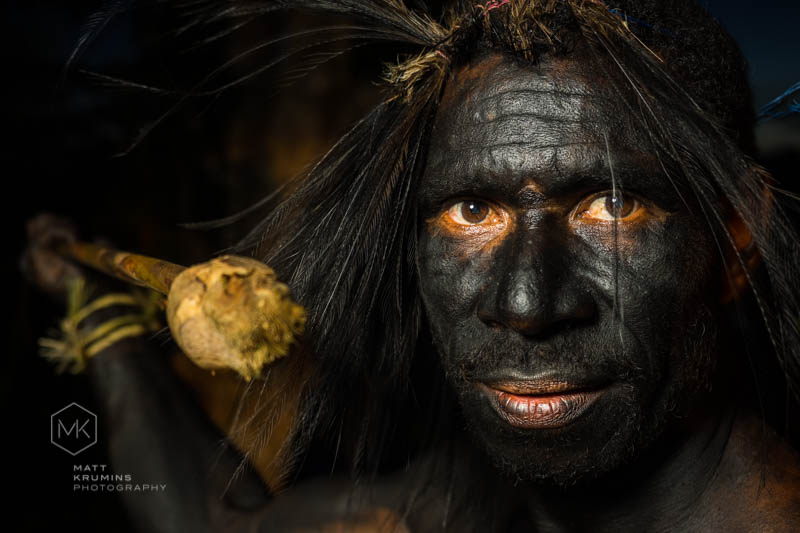 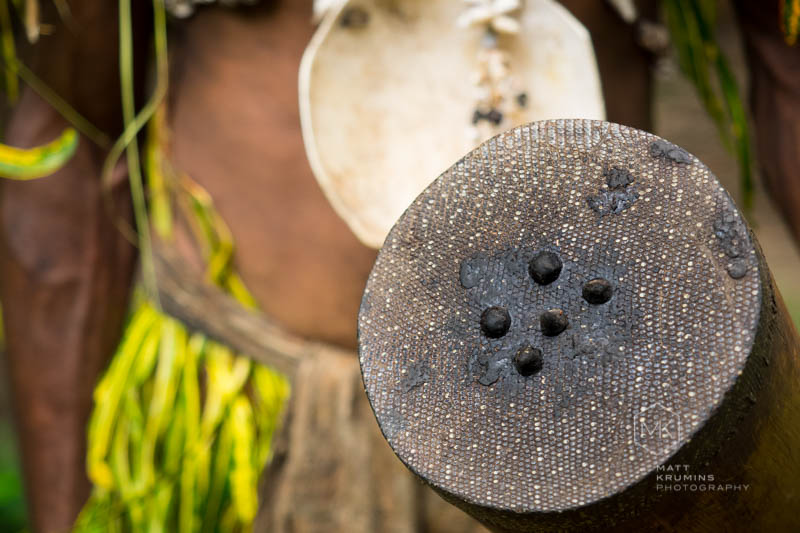 Our week is full of adventure, walking trails visited by so few outsiders before us, relaxing in the tranquility of the resort grounds and diving reefs almost completely isolated from the outside world. We have traveled to dive destinations all over the world but Tufi is one of those special few. Whilst the resort itself has changed immensely since our family first visited in the 1980’s the authenticity and symbiosis with the local community has not. It isn’t just another resort on a long list of destinations, it’s a living and breathing part of a culture, isolated from the pitfalls of mass tourism. It’s a place that has a million different stories and a million different journeys but all with one thing in common, it’s heart.

Join me on a private UW photography workshop!